Is It Mandatory For Police Officers To Have Insurance? Should It Be? 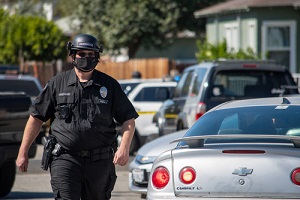 Incidents of police misconduct involving unarmed Americans of color have become increasingly common in recent years. Therefore, a national discussion has begun over the most effective ways to hold law enforcement officials accountable in these situations. One option is to mandate that all police officers carry professional liability insurance. Here is a close look at this subject.

What Is Police Liability Insurance?

For police officers, liability insurance covers property damage and personal injury arising from “wrongful acts.” In the event of a lawsuit from a civilian (e.g. for false arrest, negligence, civil rights violations), this type of coverage can be extremely helpful. Several different types of officers (from traffic cops to detectives) can acquire a liability policy. A police liability policy typically does not cover damage to property such as squad cars that isn’t directly tied to a wrongful act.

Should Liability Coverage be Mandatory?

The answer to this question obviously depends on who you’re asking, although many experts today believe police officers should be required to have liability insurance. Many states and cities are actually beginning to introduce laws or proposals to increase accountability for police officers. For example, a New York state lawmaker introduced a bill to require police to obtain liability insurance in July 2020, just weeks after Officer Derek Chauvin killed George Floyd in Minneapolis.

Currently, taxpayers bear the cost of funding settlements or verdicts involving police, as well as the cost of paid leave while an officer is being investigated for misconduct. These laws are designed to help change this (just like laws mandating that officers wear body cameras). A comparison could be made to the medical industry. For a long time, most doctors didn’t have insurance, although now many do because of the frequency of malpractice suits.

Around that time, Congress also presented the End Qualified Immunity Act. Qualified immunity is a legal benefit officers have that makes it difficult for anyone to sue and prosecute them following incidents of police brutality, even when someone’s civil rights are violated. The immense power that police unions hold also makes lawsuits difficult.

In order to identify the most high-risk officers within a police department, insurance professionals would rely on factors such as number of criminal convictions, civil complaints, unjustified use of firearm, and restraining orders for domestic violence. Except for police who work in areas with high crime rates, most officers have no need to frequently discharge their weapon, so that metric is especially revelatory.

People like Deborah Ramirez, a Northeastern University law professor who focuses on law enforcement reform, also believe that there is significant room for improvement in terms of racial profiling. Ramirez says many police officers often receive calls from dispatchers about black individuals in predominantly white neighborhoods who aren’t necessarily doing anything wrong but are deemed suspicious anyway. 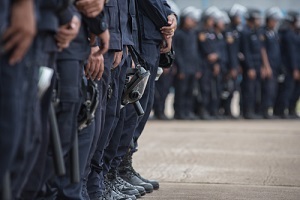 Ramirez suggests that both dispatchers and officers should be better trained to communicate more effectively (e.g. by being more specific about what a person is doing). According to one survey conducted by the Bureau of Justice Statistics, 273 out of 100,000 blacks on average are subjected to police force each week, compared to just 76 per 100,000 whites.

New York City is one notable example of a city where civil claims against police officers have increased in recent years. According to a 2013 report from the city’s Comptroller, the number of lawsuits filed against officers in 2012 went up 22% compared to the previous year (from 4,584 to 5,601). For this reason, many police departments around the country are now striving to better monitor their officers.

Reach out to the professionals at JMG Insurance Agency to learn more about police liability insurance and its benefits. Since 1916, we have been dedicated to serving the insurance needs of clients throughout Connecticut, New Jersey, New York, Hawaii, and Massachusetts. As an independent agency, we work closely with many stable and reliable insurance carriers.

If you work as a police officer, you can benefit substantially from acquiring liability insurance. Our policies offer coverage against “wrongful” acts, which include claims of bodily injury, personal injury, or property damage. In the event of a lawsuit, liability insurance can also help pay for legal fees. We offer plans requiring $100,000, $250,000, and $500,000 in coverage.

At JMG, we understand the many risks that law enforcement officials frequently face. Therefore, we are committed to helping you stay protected regardless of your specific position within a police department.